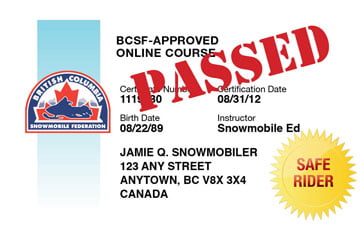 Accepted in all Provinces

British Columbia does not require a course. There is no minimum age requirement to operate a snowmobile on Crown Land. For persons at least 16 years old, other requirements may apply.

There is no minimum age requirement to take this online course.

Is the British Columbia Snowmobile Licence the same as the permanent Snowmobile Safety Education Certificate?

Why Snowmobile Safety Education Is Important

Snowmobiles have increased the popularity of outdoor winter recreation. More than three million people in the United States and Canada snowmobile each winter, enjoying more than 230,000 miles of groomed public trails.

As trails and recreation areas become more crowded, it’s especially important for people to operate these vehicles safely and responsibly.

Most states and provinces that have mandatory education requirements will accept the Snowmobile Safety Education Certificate. (This is known as “reciprocity.”) If you plan to operate in another state or province, make sure you check their reciprocity laws before doing so.

Your Snowmobile Ed course comes with a dedicated customer service team made up of real people, not robots. We’re here to provide assistance to you through all channels—phone, email, and chat.

We’re available to help you:

Send Us an E-mail